The Analysis of Carbon Intensity on Listed Companies in HK

The Paris Agreement, an ambitious multilateral treaty that was agreed in December 2015, succeeds the old Kyoto Protocol that will expire in 2020 to become the latest global target and implementation plan that tackles climate change. China formally signed it on 22 April 2016, and ratified it on 3 September 2016. As decided by the Central People’s Government, the Paris Agreement applies to the Hong Kong Special Administrative Region, which accordingly has developed the ‘4Ts’ framework for its long-term strategy to confront risks associated with climate change. ‘4Ts’ is the combination of Timeline, Targets, Together and Transparency, which refers to ratchet-up every 5 years, the 2°C target, transparent implementation, and collaboration with different parties, respectively (Figure 1). 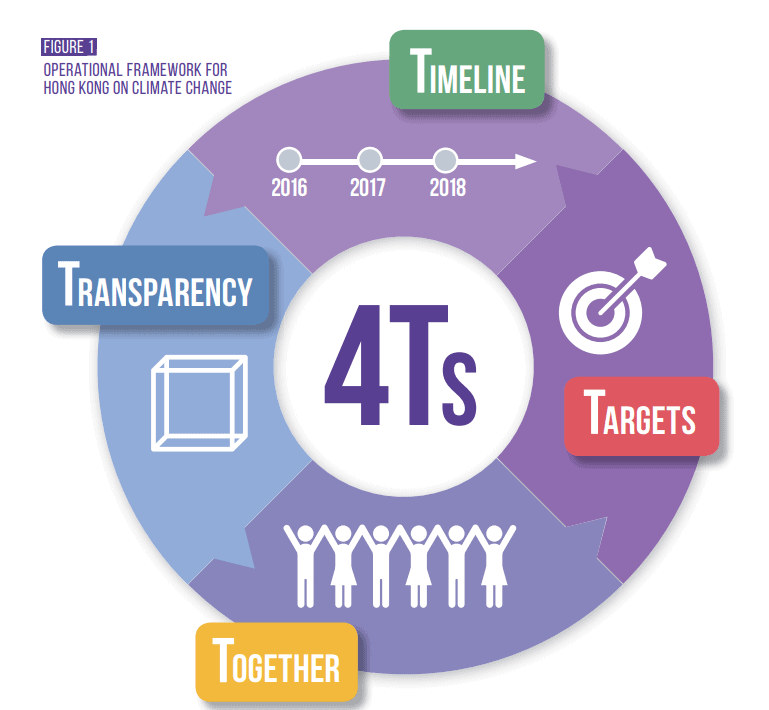 To systematically address climate change and efficiently keep with Hong Kong’s contribution towards the 2°C target, Hong Kong has set an explicit carbon intensity goal of 65% to 70% by 2030 using 2005 as the base, which is equivalent to 26% to 36% absolute reduction and a reduction to 3.3-3.8 tonnes on a per capita basis. 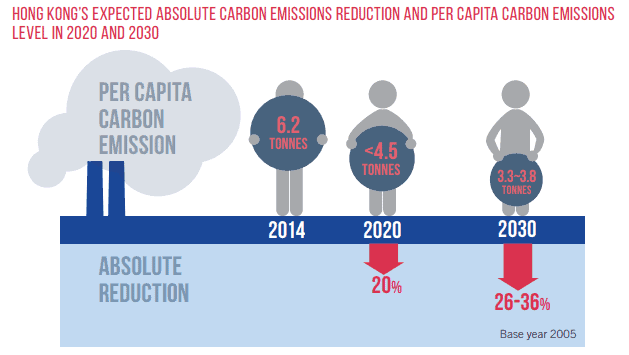 Therefore, there is no doubt that accomplishing such goal requires the joint effort from various parties, including individuals, financial institutions, enterprises, government, communities, and so on. To provide the right momentum to stimulate a new energy efficiency market where companies keep exploring and making commitment to carbon reduction, GCESG has done a research about the status quo of a wide range of listed companies in Hong Kong in terms of their performance on carbon emissions.

An emission intensity (or “carbon intensity” – C.I.) is the emission rate of a given pollutant relative to the intensity of a specific activity, or an industrial production process. In the case, emission intensities are used to derive estimates of greenhouse gas emissions based on the annual revenue of the sample enterprise, and to compare the environmental impact of companies with different business nature. Specifically, the data of total GHG emissions (Scope 1, 2 & 3) and revenue throughout the financial year 2017 was extracted from the ESG and Annual Reports of over 100 listed companies from 11 industries in Hong Kong. A series of simple calculations were then conducted, the results of which were sorted and finally presented in the bar chart below.

This evaluation of carbon intensity among listed companies in Hong Kong gives both companies and investors a great number of actionable insights. Apart from the benefit of benchmarking with peers, what we value most from this analysis is the comprehensive distribution pattern of corporate carbon intensity across all industries in Hong Kong. By incorporating more data into this research in the near future, GCESG is looking forward to depicting a more in-depth, consolidated and inclusive picture of carbon intensity among companies. Hopefully, GCESG, through its relentless innovation and research in corporate sustainable development, could help Hong Kong unveil its carbon intensity pattern, diminish uncertainty of what it might face next, and eventually provide valuable insights for the government to keep shaping public education, as well as our policies towards climate change.